failing to install a phone (continued)

In a previous post I talked about my failure to install a phone and a home network in a friend's home. A long time has passed since then and I've gone back to his house 2 additional times (as far as the phone and network installation is concerned).

To make the long story short, I've managed to install everything successfully.

The telephone was relatively easy (after the issue with the correct line was resolved), since a call center was not required (if anyone talks to any of the 5 phones and another one picks up another phone, he will just join the conversation).

The biggest challenge that had to be dealt with was the network, since the house didn't have a LAN infrastructure (can you believe it? A 3-storey house with a 100m^2 underground parking and a swimming pool built in 2008 without LAN!). What I decided to do was to install a modem router at the penthouse and then transfer the network to the other floors through the power line using Belkin HD powerline adapters. 4 adapters were needed:
So, we (me and my friend) thought to purchase two HD powerline kits, which contain a pair of adapters each and pair all the adapters together. Though, due to a limitation of the kits (or lack of proper explanation in the manual), the 4 adapters were unable to be synchronized (couldn't understand what was wrong; possibly unable to enter search mode?). When despair and fatigue had evaporated our hope that this could ever work, I thought one last thing that we could do: To return the one of the two kits and buy a single adapter instead (whose manual explicitly referred to pairing with other adapters). I wasn't very optimistic that this idea will bear fruits (and if it did, I though they would be rotten), but this scheme actually produced excellent results and the resulting network was exceptionally stable and fast (the penthouse to the basement link is the slower with 4mbps).

I will end this post here, but I will edit it accordingly with total cost of the infrastructure and further details about the project!

Today is a bad day. A day full of sorrow and remorse. My thoughts are (and yours should be) with my beautiful motherboard (or, unlikely, its RAM) that ain't continue the boot process beyond the detection of the graphics' card and the BIOS manufacturer printout. It stops right before the RAM chip detection. I tried to start the PC with only one of the chips (and no drives attached), to no avail, as neither of them seems to respond (thing that increases the possibility of a motherboard malfunction).

The motherboard is the Chaintech Zenith VNF4 Ultra.

Anyone with similar experience?

Going back to resume tryin' and cryin' :p

I'm pretty good too, thanks for asking.

Today, kids, we're gonna talk about self analysis; not self disclosure, an idea that just popped into my head :p

A colleague at work is very fond of analysis and we've thoroughly discoursed about its merits and advantages. In this post, I will try to establish the notion of self analysis, as that concept has been perceived by me.

In order for one to analyze itself, one should be sufficiently qualified for practising clinical psychotherapy, or even vaguely familiar (that's me) with the concepts of psychology and psychotherapy. One should have read his share of Yalom and Lacan.

After the above requirement has been met, the therapist-patient hybrid should successfully detach the 2 aspects of itself, in order to establish a fictional dialog session. The therapist self should be agnostic of the patient self in order for the maximum objectivity to be achieved.

Enough with my incomprehensible mumbo jumbo.

Today was the big day that I finally went to see the great blockbuster 2012.

Now, I will write some thoughts. It was an action movie. In an action movie you expect to entertain yourself by watching the awesome (and, may I add, highly unlikely) adventures of some pretty damn lucky people from the United States of America. That's why they are cool :P

The movie sucked in every other aspect (scenario, scientific basis, acting), but all these parameters are sufficiently covered-hidden by a lot of action :P (imagine the dressing that hides the real taste of the food)

That's all boys and girls :)

failing to install a phone

How do you do? I could be better actually :p Today, one of my best friends called me for help with his new phone connection in his new house. I consider that I have a certain aptitude towards electronics, so I gladly accepted his invitation.

I expected the usual stuff that I deal with in similar situations.. That is: A functional connection to the telephone network at the outdoor station where the line to the house should be connected. In the house, things should be simpler, with a small call center to manage the phones and a router, coupled with some switches and access points to manage the network.

But not at all.. Indeed there was a (working) connection with the telephone network at the outdoor unit, but there were, like, a million telephone wires in the indoor unit without even a remote indication that would denote which of these is connected to the outer world. After countless combinations, we failed to locate the correct line, so we decided to call a technician (as I, the worthless bloke, failed miserably). If the technician does his job well and the telephones start working, I'll go and fix the net (and also fail at that task too :p)

I'm ok :P Have I got news for you! I'm the proud owner of an HTC Hero (pictured below)!

The Hero has some advantages and disadvantages.
It's merits are endless and contain, among others (all the features below are out-of-the-box features; using the Android Market or searching in the web, every imaginable feature can be added):
On the other hand, there are some drawbacks:
I hope that most of the drawbacks above will be resolved with the upcoming Android 2 :P
I can live without tight blogger integration, although such a feature would be awesome (imagine taking a photo of a place and geotagging-uploading-blogging with one keypress). I've found, though, an application for on-the-fly blogging, but it's not as cool as my k610's tight integration ;)

Your opinions for the hero or any other android phone (especially interested in the HTC Tattoo and the Motorola DROID-MILESTONE)?

Have found this article in lifehacker.com. Very cool. Awesome. Just rip your original Windows 7 dvd, make a slight modification and here you are! :D
Posted by dilu666 at 20:40 No comments: 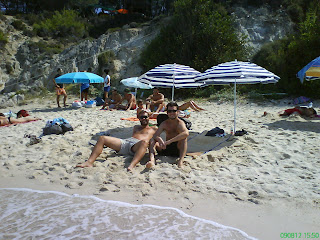 After three days in the 1st peninsula of halkidiki (kasandra), me and my friends decided to visit the 2nd one, sithonia. There, we went to a beautiful little beach, kavourotripes. It is one of the greatest beaches I've been to.

How do you do?

Today I will start my vacations, which will last till the end of August.

For starters, I will go at the Polihrono village at the peninsula of Kasandra in Halkidiki for 5 days (from 20090809 to 20090814), along my good friends Stathis and Tasos . We have booked a room at the hotel Odiseas. It is worthy to note that the hotel has free wifi access to the net. Awesome :D

I'll try to post some photos from the hotels.

I created a mips virtual machine using these instructions. What I exactly did was:
It's awesome. :D 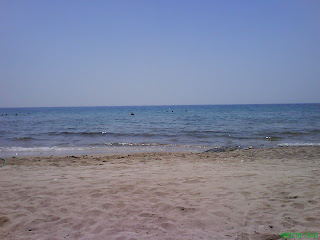 How y'all doin'? I am at the beach of Agios Dimitrios near Koropi.
It's not the first time I come here, but today it was special, as I
managed to skip the traffic, which was terrible, using my GPS unit.

Other news include that I booked a room for me and 2 friends of me at
the Kasandra peninsula of Halkidiki and specifically in the Polihrono
village. We'll be there from the 9th of August, till the 14th.

I'm still striving through the hardships of life :P

Today kids, I'm gonna show you my workplace! I know that it's dreamy and extremely sexy; that's why I'm showing it off ;)

Let's start with the right side; in the picture below, you can see the following things there:

Now it's the turn of the center side, here the main work takes place. Let's see what that contains:

As for the left side, it is worthy to note:

Now you've seen where I work. Isn't it magical? It sort of reminds me the pictures of Google in Switzerland.

I downloaded (through the windows update) Internet Explorer 8, with blog accelerator. I am now trying it out :P

Sorry for posting so scarcely. :(

I have great news! My "site" (http://dilu.no-ip.info) now appears in the Google search engine! Search for "diluSouthpark" for example. Some of the results point to my site :P

How y'all doing? My best wishes for the new year to all! I'm just fine, but today my vacations end :(

While trying to get a good night's sleep, some thoughts entered my mind and urged me to change my fundamental beliefs on god and all that supernatural stuff.

I then extended this "I don't know, I don't care" theory of mine and realized that I don't believe in anything that can't be proven using science and/or hands on experience. (i.e. I deny any form of dogma) If I am somehow interested in the field of belief in question, then I'll consider the possibilities based on the scientifically proven facts about it and make my selection based on them. For example: If the "extraterrestrial life" topic is under discussion, I will state that my belief is that it is highly possible for aliens to exist. As a footnote I will also add that I don't care whether they do or not, but it is very fun to develop theories and talk about it.

The question of belief always brings to one's mind pictures of god and supernatural stuff and so on. So, here's what I think about god:

It is highly unlikely that god exists. I don't care if it does. (don't get me started about the genre now.. Do you think that the supposable entity that supposedly created the whole universe would have a penis or a vagina?)

So, until now I didn't believe in god. Now, after this revelation, my belief is:
I don't believe that god exists, but I don't have definitive knowledge in order to deny its existence. In other words, I define myself as an Agnostic Atheist (some authors call it Weak Atheism).

You can find some excellent articles on theism in general at the endnotes of the wikipedia link above.